“Biodegradable and transplantable, Grownet is part of Mansfield’s plan towards a more efficient, better performing and greener future…”

The Grownet is a plug liner, made up of a biodegradable web, with an open net structure. The net structure not only ensures binding of the root ball but it also provides a structure so that the plant’s roots can continue to grow uninhibited.
Grownet is completely biodegradable. Once it is in contact with substrate, natural micro-organisms and bacteria gradually break the Grownet down. The speed of this decomposition is influenced by the temperature, humidity and the pH value of the substrate. During the disintegration process, the Grownet is converted in to CO2 and H2O. Even before the Grownet begins to degrade, the roots have the ability to penetrate the net and start bursting it open.

Where did the Grownet come from?

In the Netherlands in 2010, Andre Jansen of Maan Group started developing a biodegradable plug based on a request from a contact in the agricultural sector originally called Growcoon. The biodegradable plug was based on Maan Group’s existing adhesive technology. It took a full five years to optimize the concept. During this time the focus was on aspects such as reproducibility, quality and raw materials. 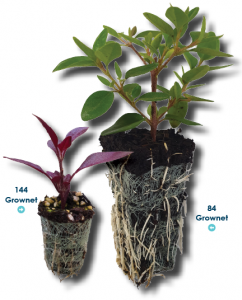 Why is Mansfield’s making the change to Grownet?

✅ Mansfield’s Propagation Nursery has been reaching it’s limits as to how many plants it could produce in a season. In order to move to the next stage of production we needed to install more automation and a transplantable plug.

✅ Whilst tubes will remain for certain lines, we have listened to feedback from our customers requesting us to move to a transplantable product.

✅ Our customers would like more plants and as early in the season as possible. The Grownet will allow us to fulfill customer timing requirements and more plants into the idustry with a quicker turnaround time.

✅ The Grownet is biodegradable and compostable product which means fewer plastic tubes going in to landfill.

How will the change benefit you?

You, as a business, will now be able to remove the de-tubing process and tube waste. For those who currently have or are researching transplanters, this will be a method that will suit the Grownet. According to our trials, plants will rapidly develop a stronger root system and the root disturbance is far less with a Grownet encased plant. Fresher stock can be confidently planted if required. 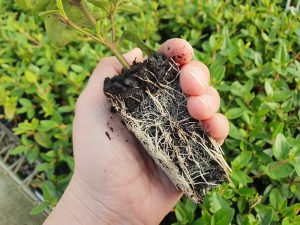 What our customers have to say…

“From the moment the plants in the Grownets arrived, we knew this was the future in plant production. Potting with them was fast, clean and effortless and with no plastic tubes to recycle in this era of global warming, reducing our carbon footprint can only be a positive. The plants grew fantastic in 140mm, root structure was excellent and well within our expected time frames that we expect from traditional plastic tube grown stock. I thank the team at Mansfield’s for allowing us to trial this game changing product and hope the industry as a whole embraces it.” – Shane Male from Meyer Nurseries (November 2019)